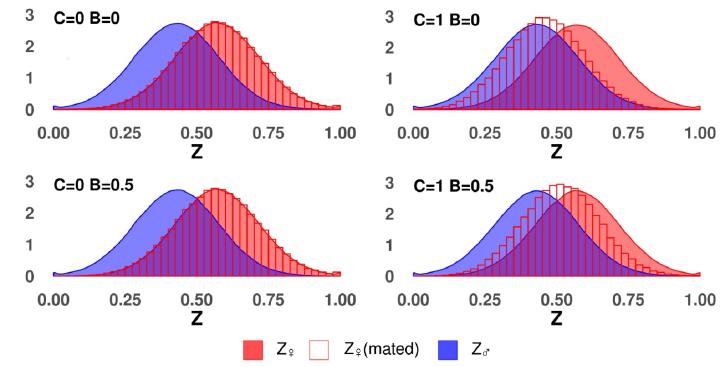 Traditionally it has been suggested that sexual selection can cause sexual size dimorphism (SSD). However, a recent review in gastropods shows that SSD itself can also cause sexual selection (Ng et al., 2019. Animal Behaviour, 148, 53e62). This may be the case if mate choice exists, with males preferring to mate with females similar in body size but somewhat larger than themselves (female-biased preference). We formally investigated this verbal explanation by computer simulations using a Gaussian mating preference function. Parameters of that function were also estimated from empirical data. Our results suggest that sexual selection (estimated as selection differential) is strong when mate choice is high and exerted by only one of the sexes, being influenced by SSD and the magnitude of the female-biased preference. All these factors cause a negative relationship between SSD and the (sexual) selection dif- ferential, similar to that observed in Ng et al.‘s review on gastropods. Empirical estimates of male mate choice from wild-captured mating pairs of different gastropod species confirm that mate choice by males is biased towards females slightly larger than themselves. Our results also illustrate that if mate choice is truly involved in determining SSD, present-day sexual selection cannot be used to estimate the past magnitude of mate choice, as SSD influences present-day patterns of sexual selection.